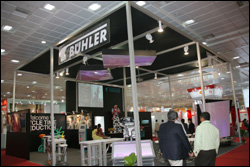 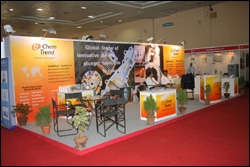 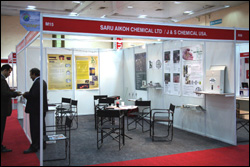 The specialty of this year's exhibition was operational display of machines and equipments by over 25 companies. Also German Pavilion occupying 200 sq. mtr. area, with 9 exhibiting companies, attracted the visitors.

ward winning castings of M/S Endurance Technologies Pvt Ltd., Chakan, Pune & Anant Enterprises, Chakan, Pune were displayed in the exhibition Publication of ACAI and NADCA were on display at the ACAI stall. 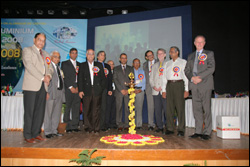 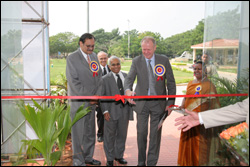 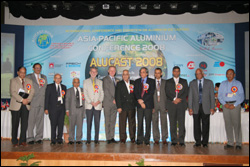 It was inaugurated by Mr. Michael Boneham (President and Managing Director, Ford Motors India). In his inaugural speech he covered in detail about the future of the industry and Ford India's plans and strategies for Indian and global markets. Though the industry is passing through a critical phase, Mr. Boneham's optimistic inaugural address gave a boost to the gathering who heard him with rapt attention. Later he inaugurated the exhibition as well.

Shri K. S. Sripathy (Chief Secretary, Govt. of Tamilnadu), lighted the kuthuvilakku and addressed the gathering. He mentioned about various facilities and incentives offered by Tamilnadu Government for setting up new projects, and invited entrepreneurs to set up units in Tamilnadu.

Shri A. K. Taneja (President, Shriram Pistons and Rings Ltd., Ghaziabad) delivered the Keynote address. He gave an inspiring and thought provoking speech covering the dos and don'ts to come out of the present situation. He advised the gathering to consider the current situation as an opportunity and challenge to make necessary corrections to face the bright future with confidence.

24 Technical Papers were presented. One Paper by Dr. Wolfgang Kaettlitz, Foseco GmbH, Germany, could not be presented. Shri Ravi Podila presented the paper on behalf of Shri G. Natesh of Chemtrend Chemicals Co. Pvt. Ltd. 22 papers are printed in the Technical Papers Volume. (Brief Summary of the content of these 22 papers is given in the following pages in this issue.)

It was held on 12th December 2008, and was inaugurated by Shri R. Maitra (Executive Director, EEPC). He emphasised for joint work by the association and EEPC for the development of Export and for preparing the road map.

Shri P. N. Sadhu (President, Aluminium Casters' Association), highlighted the role of the Association in bringing Buyers and Sellers to work together.

In his Keynote address, Dr. Guenter Lorenz (Sourcing Agency, Europe) expressed that India can become the leading exporter to Europe, if time commitment and business discipline are understood and implemented properly.

A Panel Discussion on 'R & D - Industry Interaction'. It was held on 13th December 2008. The Panel members were

Dr. Khangaonkar introduced the members and explained the overall plan of the discussion. He emphasized that if the Indian Aluminium casting industry, particularly the die-casting industry, is to reach a pre-eminent position in the international field, it must have substantially higher activity in R & D than at present. In the current period of recession, it is necessary to use the man-hours of expertise available for healthy long term research.

Dr. Suresh Sundarraj explained some features of current R & D directions adopted in General Motors and the co-ordination with the company's global efforts in R & D.

Dr. V. Raghupathy explained the present role of Government funding of R & D in various technical fields and priorities of financing. He explained the need to co-operate with academic institutions, who are considered as primary moves in any R & D scheme, though the backing of industry for a specific idea and its possible use would be necessary. With reference to the co-operative work between the industry and the R & D institutions

Dr. Misra explained the very positive and encouraging experience as observed by CRCs (Co-operative Research Centers) in Australia, set up at several places, with good participation by industry, in a number of fields, including die casting technology.

Initial disccusion by the panel members was followed by lively participation by other delegates. It was felt in conclusion that ALUCAST should have a 'Standing Committee on R & D', which should take up continuous activity regarding data collection on existing R & D efforts, facilities at various academic and R & D institutions, and R & D fund for sponsoring specific schemes of R & D for the benefit of die-casting industry.

It was held on 13th December 2008. The Valedictory Address was given by Mr. Achim Klotz (President, Buehler Druckguss AG, Switzerland). He appreciated the efforts put in by ALUCAST to bring all die-casters on a common platform, and assured continuation of full support by Buehler in future. He visualized a bright future for Indian die casting industry in global market.

It was held on 14th December, 2008. It was inaugurated by Prof. S. Sathik (Former Vice Chancellor, University of Madras). The following two projects were selected for outstanding work.

project by Shri Jayananda (Department of Metallurgical and Materials Engineering, National Institute of Technology, Surathkal, Karnataka) on "Investigation of Casting-Chill Interfacial Heat Transfer during Downward Solidification". He was felicitated with a Gold Medal and a Certificate.

A project by Shri Shivank Tandon (Department of Materials and Metallurgical Engineering, Indian Institute of Technology, Kanpur) on "Spray Casting of Al 2024 and Al-Si Alloys". He could not attend the function.