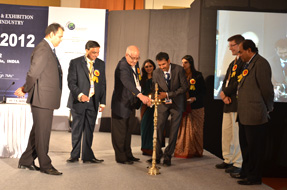 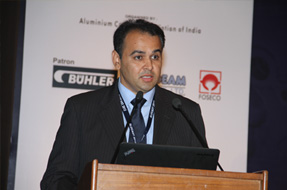 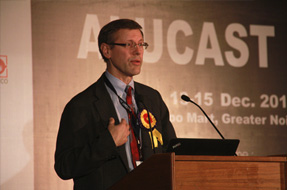 In his Presidential address, Mr.Firodia said that even in the face of severe economic crisis in some parts of the world, the die casting industry in India (so also in Asia Pacific region) is buoyed by the steady growth of the Auto Component industry. To fully capitalize on this situation, the Indian die casting industry needs to modernize and ramp up production capacities, move up the value chain by producing high value-added parts and sub assemblies. India has to convert all of the comparative advantages into competitive advantage. The Technical papers chosen for presentation in ALUCAST 2012 Conference deal precisely on this aspect, helping us to be better prepared to meet customers' expectations in future.

This was followed by release of the Technical Volume ALUCAST 2012, the Souvenir of ALUCAST 2012 and the December issue of the ALUCAST Journal by Mr. Maitra, Mr.Twarog and Mr. Firodia.

At the end of inaugural ceremony, the following awards were presented 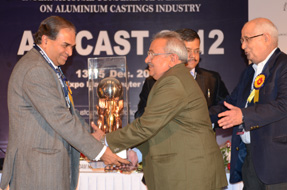 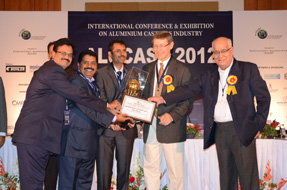 All the recipients of awards thanked the Association and the organizing committee members for recommending their names for the awards.

Presenting a memento to Mr. Maitra, in appreciation of sparing his valuable time to attend the conference and delivering the Key note address, Mr. Sadhu thanked Mr.Maitra for the continuous support given by Maruti Suzuki India Ltd. to the Aluminium Casters' Association of India (ALUCAST). Mr.Sadhu sought continued co-operation in future endeavours also.

The international exhibition was inaugurated by Mr. Daniel Twarog (President-NADCA). All members of the organizing committee along with President ACAI and Patron ALUCAST 2012 also attended the ceremony. After the inauguration the entireteam took a quick round of the exhibition area. The efforts taken by the exhibitors and the organizers to put up stalls and exhibits of international standards came in for appreciation from Mr. Twarog.

The Chairman, Technical Committee, Mr. Bambra, gavea brief introduction to the concept of the Theme, structure and sequence of sessions in the Conference.

There were a total of seven sessions. Presentation of Technical papers occupied four sessions (3 papers each). One entire session was dedicated to observe "National Energy Conservation Day" on 14 Dec 2012. Dr. Joachim von Scheele, National Applications Technology Sales Manager, BOC India Ltd. was the Chief Guest for the session. He addressed the gathering and explained various applications which have huge potential for energy savings. This was followed by a very interesting Case Study presented by Ms. Parisa Javadian of KMA, Germany. Energy saved by installing Energy efficient exhaust air filtration systems in a foundry in full operation was demonstrated and figures of actual savings were provided. 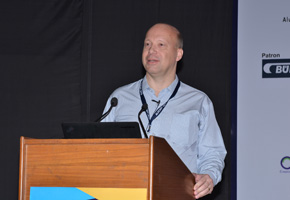 The high point of the Conference was provided by the two sessions on the third day, Dec 15, 2012. Representing Maruti Suzuki India Ltd, the leading passenger car manufacturer of India and a large OEM customer for aluminium castings, Mr. Sunil Kakkar (Supply Chain MSIL) presented the four wheeler industries' expectations from their casting suppliers, as of today and also the expected future trends.On behalf of two wheeler industry, Mr. Kamal of Honda Motorcycle and Scooter India Ltd. presented the current scenario and also listed the future initiatives – specifically of Honda and two wheeler industry in general, dealing with cost, quality and timely delivery.

Mr. Vivek Joshi, General Manager (Quality& Systems), Jaya Hind IndustriesLtd., Tier 1 supplier to a number of four wheeler manufacturers, addressed most of the points raised by Mr.Kakkar and recounted at length efforts and precautions taken by Jaya Hind to meet specific and special requirements of their customers. Mr. A. S. Bhalla of Amtek Auto, with his long experience in the manufacture and supply of castings to the two wheeler industry, tackled effectively points raised by Mr. Kamal.

In between, there were Question & Answer sessions, with active participation from the audience. All the four presenters fielded the questions expertly and answered to the full satisfaction of the audience.

Overall, the quality of presentations and level of participation were above par- with only a couple of exceptions.

Mr. Twarog, who attended the first two days of Conference was appreciative of the chosen theme, and the idea of meeting customers' expectations thro' the 7 Ms. Mr. Twarog was highly impressed by what he saw during his visits to die casting units in Pune and Gurgaon. He expressed his assessment that Indian die casting industry can hold its own in the global market. He showed keen interest in developing close relations between NADCA and ALUCAST for mutual benefit.

(Note: On his return to USA, Mr. Twarog has written to the President of ACAI giving proposals for co-operation on four points. ACAI has also responded positively, indicating in-principle acceptance on three of the four points. A special committee has been formed at ACAI Head Quarters to work out modalities of operation, logistics etc and present their recommendations to the Board on a time bound manner.) 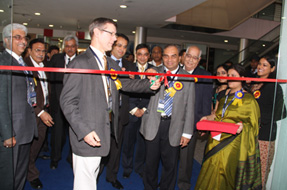 Inaguration of Exhibition by Mr.Daniel Twarog 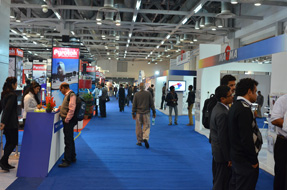 The stalls at the Exhibition 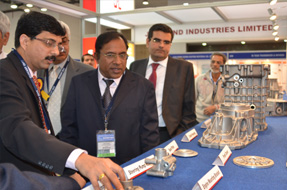 Members of the ALUCAST 2012 Organising Committee of the Delhi Zonal Center deserve congratulations and the highest praise for successfully organizing the exhibition which conformed to international standards, in terms of size, design, display, layout, visitor friendly ambience and visual appeal. Amongst the 93 exhibitors, were several firms from abroad (China 7, Germany 4, Italy & Taiwan 3 each, Japan 2, Switzerland & Singapore 1 each), apart from over 60 from India. These consisted of manufacturers of die casting machines, machine tools, dies, design aid supporters and suppliers of peripherals. For the first time in an ALUCAST exhibition 15 machines were displayed live. Inclusion of Machining Centres and Tool manufacturers was also a first time attraction. Major die casters Sunbeam Auto Pvt.Ltd, Jaya Hind Industries and Rockman Industries exhibited their wide range of aluminium die cast parts. Some 1500 visitors who came from various regions of India and some from abroad were highly impressed about the arrangements. 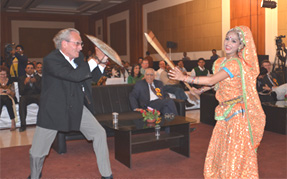 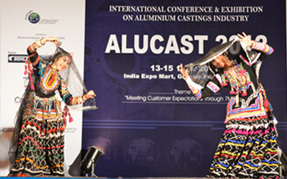 As a very important part of the ALUCAST conference every year, this year also the cultural event and cocktail dinner on 13th Dec'12 evening was sponsored by Buhler. The cultural event was based on the folk dances of different Indian states. The main attraction "Phoolon Ki Holi" was well enjoyed by the audience and the involvement of each person during the show was incredible. All the foreign participants in particular liked the cultural event. Dances performed by the team from Charkula Dance Academy were appreciated by the dignitaries and appreciation mementos were given to them at the end.

On behalf of the organisers, Mr.Sadhu thanked Buhler for their support over the years and expressed the belief that ties between ACAI and Buhler would continue to get stronger.

On the evening of 14th Dec, 2012 a live band performance was organized and well participated by the delegates. This was followed by cocktail dinner.

On 15th December, 2012 the function started with the Valedictory Speech by the Chief Guest, Mr. Marcello Fabbroni (Vice President- Marketing of Buhler AG Die Casting). Mr. Fabbroni thanked all the delegates, participants and the exhibitors and also conveyed his views about the technical conference. During his valedictory remark he said he was very much impressed with the activities performed during the three days. He also assured continual support and co-operation in the future activities of ALUCAST.

The concluding speech was delivered by Mr. P. N. Sadhu (Patron- ALUCAST 2012). He expressed his sincere thanks to all the Sponsors, exhibitors, delegates,speakers, session chairmen, visitors and the Organizing Committee Members, Exhibition Committee members and the Cultural Committee Members for their co-operation and support during the entire event. He also thanked ManasRekha (Event Management Team) and Mr.Manoj Sharma, Organising Secretary for their hard and dedicated work to make the occasion of ALUCAST 2012 a grand success. Mr. Sadhu also conveyed gratitude to all the distinguished guests and the Chief guest for sparing their most valuable time for this Conference and Exhibition. He also requested all the die casters and the participants for similar kind of participation and enthusiasm in the future activities of ALUCAST to strengthen the Association.