ALUCAST 2013 Conference got off to a rousing start on Friday 6th December morning with the lighting of the traditional lamp by the members of the Organizing Committee. The large conference hall with a bright ALUCAST 2013 stage back drop with a prominent placement of all the sponsors' logos was very impressive. All the guests were received with warmth by the Committee members, very well supported by the trustees and ALUCAST secretariat. Smooth and quick registration of three hundred delegates and about two hundred visitors carried out by the event secretariat set the note for excellence of the event.

The Inaugural session started with a recital of the national anthem by the dignitaries and a packed hall of delegates. Mr.Sayaji Rao Nikam, Chairman, ALUCAST Bangalore Centre welcomed the gathering and Mr T.Parabrahman, Chairman ALUCAST 2013 then presented an overview of the event , the theme and the efforts of the Bangalore team to make ALUCAST 2013 different and to reach-out to southern diecasters.

Mr. Prasan Firodia – President of ALUCAST, in his presidential address, spoke about the various initiatives of the association particularly the ALUCAST-NADCA training program and the "Buhler ALUCAST Training Centre". He also announced that ALUCAST 2014 would be at Bangalore. Mr. L. Krishnan – M.D of Taegu Tec & President IMTMA, Mr. Dipak Mane – President South Asia of Buhler and Mr. D. K. Sharma – Vice President of Godrej & Boyce addressed the audience. The speakers highlighted the need for closer interactions between various industry bodies. Delivering the Inaugural Address, Mr. Vikram Kirloskar – President SIAM and Vice Chairman Toyota Kirloskar Motors shared his experience with the Toyota companies and mentioned a few simple things that need to be practised consistently to become globally competitive. Mr. Kirloskar & Mr. Firodia then officially released the December issue of ALUCAST Journal and the Technical Volume of ALUCAST 2013. Mr Lokesh Naik, Hon Sec of Bangalore Centre, thanked all the dignitaries, speakers and delegates present, bringing the Inagural Function to a close. 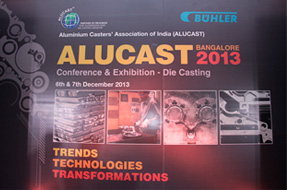 Theme of the conference 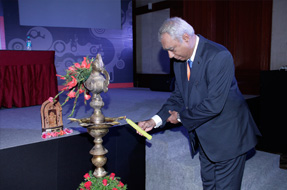 Lighting of Lamp by Mr.Nikam 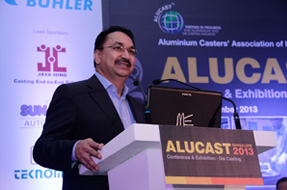 The exhibition was formally inaugurated by Mr. Kirloskar & Mr. Firodia in the presence of other dignitaries and delegates. Product information about the entire gamut of die casting industry was displayed by thirty four Indian and international participants, spread across two halls. There were over five hundred foot falls and in the backdrop of industrial slow down both the exhibitors and the visitors were happy with the opportunity to discuss and network.

The Technical Conference was a great success. Twenty two papers, covering a wide array of technical, management and product information were presented over the four sessions. All the presentations provoked high levels of interactive Q & A sessions amongst the audience packed to capacity. A video presentation showing de-burring of die cast parts by visually impaired persons, in a die casting unit of a member of Bangalore Centre, generated keen interest in all participants to support those who are differently abled. 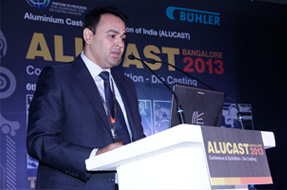 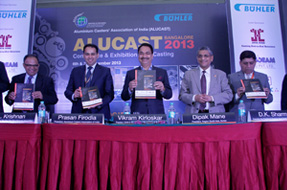 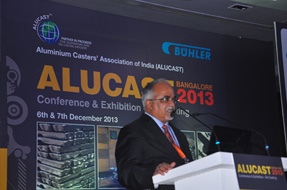 The Buhler Nite hosted on 6th by the principal sponsor Buhler, was a very enjoyable evening of fun and frolic. It was a great networking evening and all the participants enjoyed up to late night.

ALUCAST 2013, concluded on a very positive note and good appreciation for ALUCAST and Bangalore Centre team for an extremely well organized event and all the participants applauded the personal touch of the organising committee. 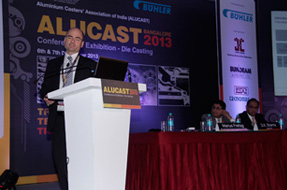 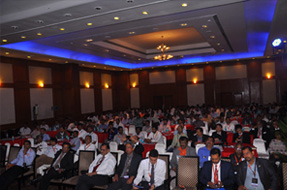 Delegates at the Conference 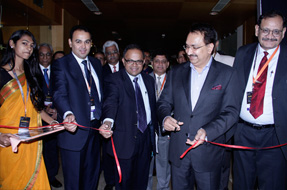