ALUCAST Focus is a national level conference where technical papers are presented on subjects/topics focusing on a particular selected aspect of casting manufacture. Pune Centre of the Aluminium Casters' Association hosted this year's "Focus" Conference in Radisson Hotel, Kharadi Pune on September 15 & 16, 2012. The focus was decided as "Role of Consumables in Die Casting". Based on this theme the entire conference was conducted under the chairmanship of Mr S.G. Pawar and convened by Dilip Panjikar ably supported by a team of organising committee members of Pune Centre. The occasion coincided with National Engineers' Day. The two-day program was thus dedicated to Sir Viswesvariah and Shri S.L.Kirloskar. The Association remembered the greatness of these two Sons of India.

Response from the members was overwhelming. 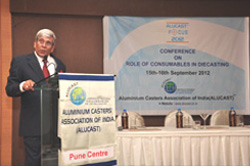 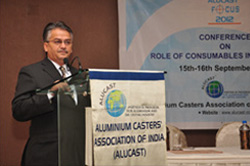 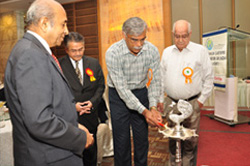 Inaguration by lighting of lamp by the Chief Guest

The delegates at ALUCAST FOCUS 2012

Apart from these technical sessions, time slots were provided to

Concluding valedictory session "Using Technology of consumables as a tool of Cost Reduction" was addressed by Dr. Mohan Godse of Endurance Technologies with authority on the subject in his immaculate oratory skill.

Special thanks to the members who supported the cause by registering attendance in number beyond our expectation.

The organising committee of ALUCAST Focus 2012 wishes to express its gratitude to all sponsors whose valued contributions made this program a great success. It was even more heartening that they all expressed complete satisfaction at the way the program was conducted.

Senior Members from the Board of Trustees including Mr Sadhu, Mr Nath and Mr Parabrahman attended the entire conference with involvement and enthusiasm which is extremely encouraging to the organisers.

Hotel Radisson staff managed the food and beverages without any difficulty exhibiting true professionalism. Their effort ensured the comfort of one and all.